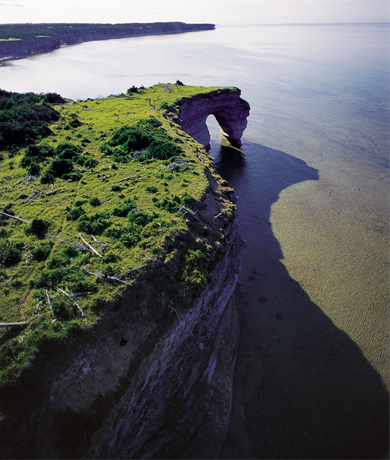 Atlantic Salmon Rivers and streams cut through the islands prehistoric limestone base creating deep canyons and spectacular vistas. Vast boreal forests of black spruce and pine trees cover the island with also intermingled and rare stands of birch. Underfoot, carpets of colourful lichens line the forest floor seemingly out of place and reminiscent of a more northern environment. Crystal blue lakes and bogs dot the vast landscape adding to this unique and exotic environment. With its awesome and jagged coastline of towering limestone cliffs, the islands coastline has once been described as looking at the “giant teeth of an immense saw blade.” Guests will discover secluded saltwater bays deep blue in colour with their pristine beaches and local wildlife. Many areas of the islands coastline are littered with fossils that have emerged from its prehistoric roots as the bottom of the Champlain Sea. The island’s pale limestone cliffs, caves and canyons got their start more than 400 million years ago with the layered deposits of sediments, ancient sea creatures and coral. Glaciers compressed and submerged the island during the last ice age. As the ice receded and the island emerged, its limestone features began forming from the seawater run off.